Skip to content
⌛ Reading Time : 2 minutes Lamborghini has partnered with Tecnomar to create a luxury yacht inspired by the famous Sian FKP 37. Precisely, the first copy of the 63 that will be built in total has just been delivered. Price of the caprice: 3.1 million euros

Apparently, the first copy is delivered! You can spend a lot of money buying sports or luxury cars. But not as much as buying a boat. In fact, it has been years since a yacht has become one of the ultimate brands of wealth. Some car manufacturers, such as Lamborghini, have realized that many customers are willing to spend several million euros to buy one. Lamborghini has teamed up with Tecnomar, a company specialized in boat building, to develop the “Tecnomar for Lamborghini 63” which is inspired by the Sian FKP 37.

The yacht’s look was developed jointly by the two companies and features a streamlined exterior with a “cut and thrust” body. On the bow, two special lights pay tribute to the Terzo Millennio concept. The boat in question also features a hardtop inspired by Lamborghini roadsters because it “guarantees not only protection from the sun and wind, but also surprising aerodynamic performance.” While the exterior is decidedly sporty and uniquely Lamborghini, the interior is also very impressive. Not even James Bond villains have a palace like this at their disposal. In the car-inspired cockpit, there’s a digital instrument cluster including a dual carbon fiber display. 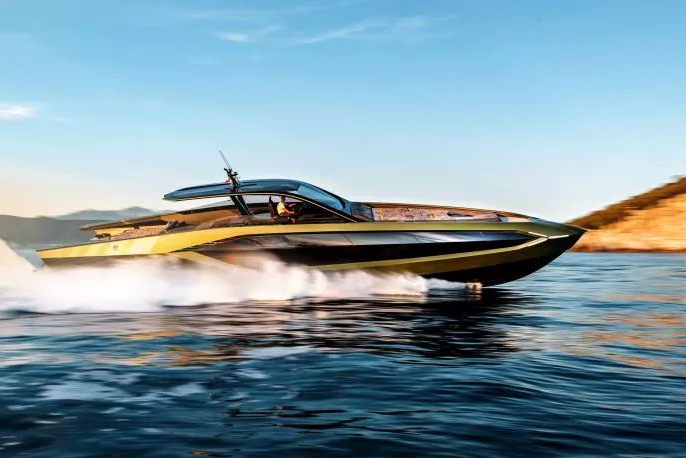 The lucky owners will also find a car-like steering wheel, a carbon fiber hull seat for the captain and two buttons for start/stop that resemble that of the four-wheeled Lamborghini. Otherwise, there is a room inside this boat in which a skylight overlooks the boat deck. The room also has two sofas as well as a television. The yacht is also equipped with a bathroom and a second bedroom with two single beds. In addition, in the manner of Lamborghini, there is an Ad Personam program that allows customers to select each material and color.

Finally, this yacht is powered by two V12 Diesels engines. These have a combined power of almost 4,000 horsepower and allow the Tecnomar Lamborghini 63 to reach a top speed of 60 knots, or about 111 km/h. With these two 24-liter engines, you’ll have to have a credit card to fill up… Nevertheless, the technical data sheet shows approximately 380 km of autonomy at its cruising speed of 40 knots, that is 75 km/h. Not bad!

Tecnomar 63 Lamborghini, this 4,000 horsepower luxury yacht in…When Lamborghini tackles a new project, it’s always to try to do better than everyone else. The proof is in this…
4.4/5 - (8 votes)

The most luxourious yachting experience in Dubai.