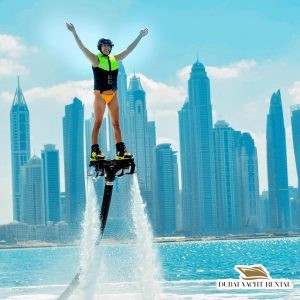 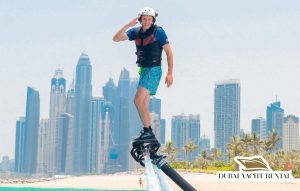 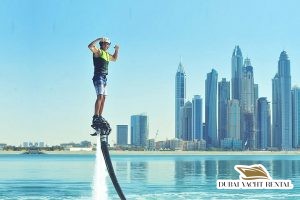 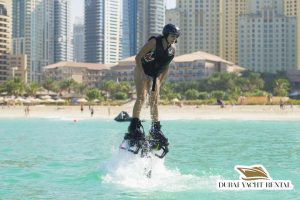 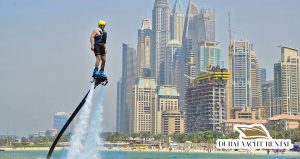 The Flyboard is a device that allows you to move in the air as well as underwater. It falls into the category of hydro-propelled watercraft. It is a French invention!

Our professional instructors will give you all the techniques and knowledge you need to fly from the first minutes.

The Flyboard is a device that allows you to move in the air as well as underwater. It falls into the category of hydro-propelled watercraft. It is a French invention!

In simplifying, we could summarize the functioning of the Flyboard, to a big fireman’s hose of 18m fed and inflated in water pressure by a big motor pump. The rigidity of the hose varies according to the acceleration of the VNM, allowing to control the elevation of the Flyboard.

This device allows to divide the flow of the hose into 4 water jets, the distribution is as follows: 2 fixed under the board and 2 others at the hands to help stabilize.

The rigidity of the hose is what keeps it in the air. The person on the Flyboard can steer by tilting the nozzles in the desired direction: up and down, up and down and 360° at the end of the pipe.

A little bit of history

Everything went very fast, after several prototypes of Flyboard, they quickly got out of the water by stabilizing themselves in the air.

This, thanks to their concept of propulsion under the feet and stabilization at the level of the hands.

This was followed by a month of development to refine the intuitiveness of flight. Once the Flyboard is finished, they filed a patent with the I.N.P.I. on September 20, 2011, and were finally able to present it at the final of the WORLD CHAMPIONSHIP IN CHINA.

Upon their return, they shot a promotional video, then put it online on YouTube, they created the Buzz with more than two and a half million views in 15 days, hundreds of TV rebroadcasts in the world and programming of shows in the most prestigious places on the planet (Las Vegas, etc.). 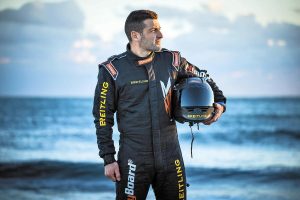 ” I started to jet in 1996, at the age of 17, in the smallest category, namely the original arm jet in the French championship.

All these years have been as beautiful as difficult. I often fought alone and against the biggest factories in the world.

Until the day when I was contacted to join one of them, after having beaten them, in 2005. I then became a SEA DOO – BRP factory pilot. From the beginning, I preferred to create my own team in order to be able to manufacture the machines myself and, therefore, to benefit from the best possible equipment.

All the difficulties that I experienced during these years, because of having my own team, are today my main asset, my greatest quality. Due to a lack of financial means, I was forced to be at all the positions, professional sportsman, sometimes designer of my racing hulls, but also engine builder, mechanic, developer and even salesman to approach my sponsors, and develop a distribution network for my parts.

Since I started, I have been used to working with large inequalities. My main competitors just had to drive, and the teams they were racing for had multi-million dollar annual budgets.

Despite this, we were able to beat them many times. Today, my most important asset, my strength, is the experience I have gained during all these years of racing, working, being the pilot and designer of ZAPATA RACING jets. I have been able to create machines that are much more accomplished and much more efficient than my competitors.

I develop them day by day, I am attentive and reactive to the evolution of expectations and needs. With my handheld jets, I have succeeded in my challenge. My jets occupy more than 70% of the starting grids of regional, national and international championships. Now my long term goal is to develop and perpetuate my company and my brand ZAPATA RACING®. With the creation of our new 3-seater jet, I think that ZAPATA RACING® will be able to last for a long time. “ 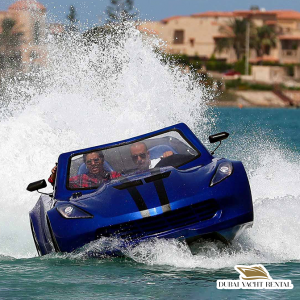 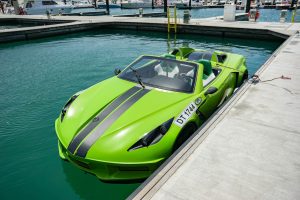 Dubai Yacht Rental invites you to discover an intuitive and unique watersport, THE JETCAR ! A replica of a sports car with steering wheel, pedals and a gearshift, driving is unequalled simplicity. Also accessible to people with reduced mobility!
Select options 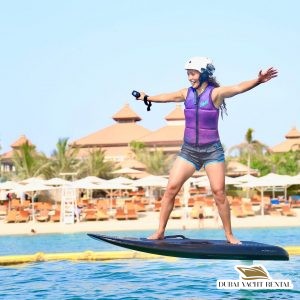 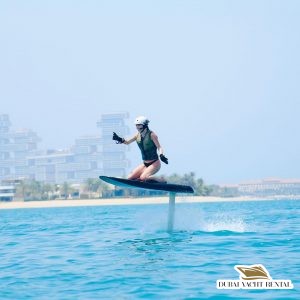 Our professional instructors will give you all the techniques and knowledge you need. You will be connected to our instructor via a wireless communication system. We use FLITE brand E-foil electric jetsurf, the best jetboards currently on the market.
Select options 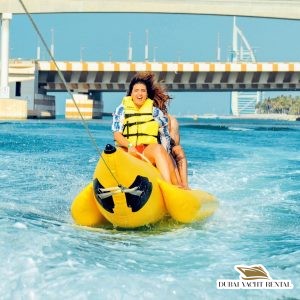 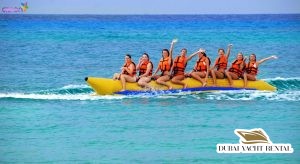 Want to energise your day at sea? Water sports are the perfect opportunity to enjoy a thrill with family and friends. Among the most popular activities of the moment, the towed buoy is always at the top of the list.
Book Now 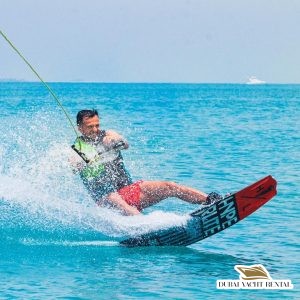 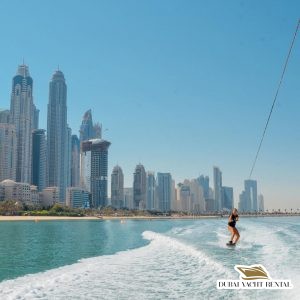 Our professional instructors will give you all the techniques and knowledge you need. Get out on the water and learn to wakeboard with a qualified coach. We specialize in teaching beginners to intermediate and expert levels for the more persistent.
Book Now 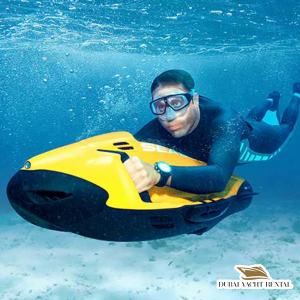 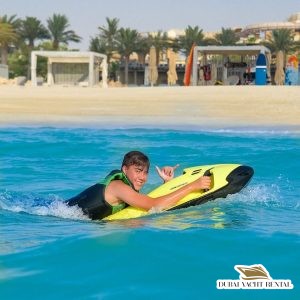 Dubai Yacht Rental invites you to discover an intuitive and unique gliding sensation, an ecological activity, which does not require any particular physical aptitude, the underwater scooter, starting from the Palm Jumeirah in Dubai.
Book Now